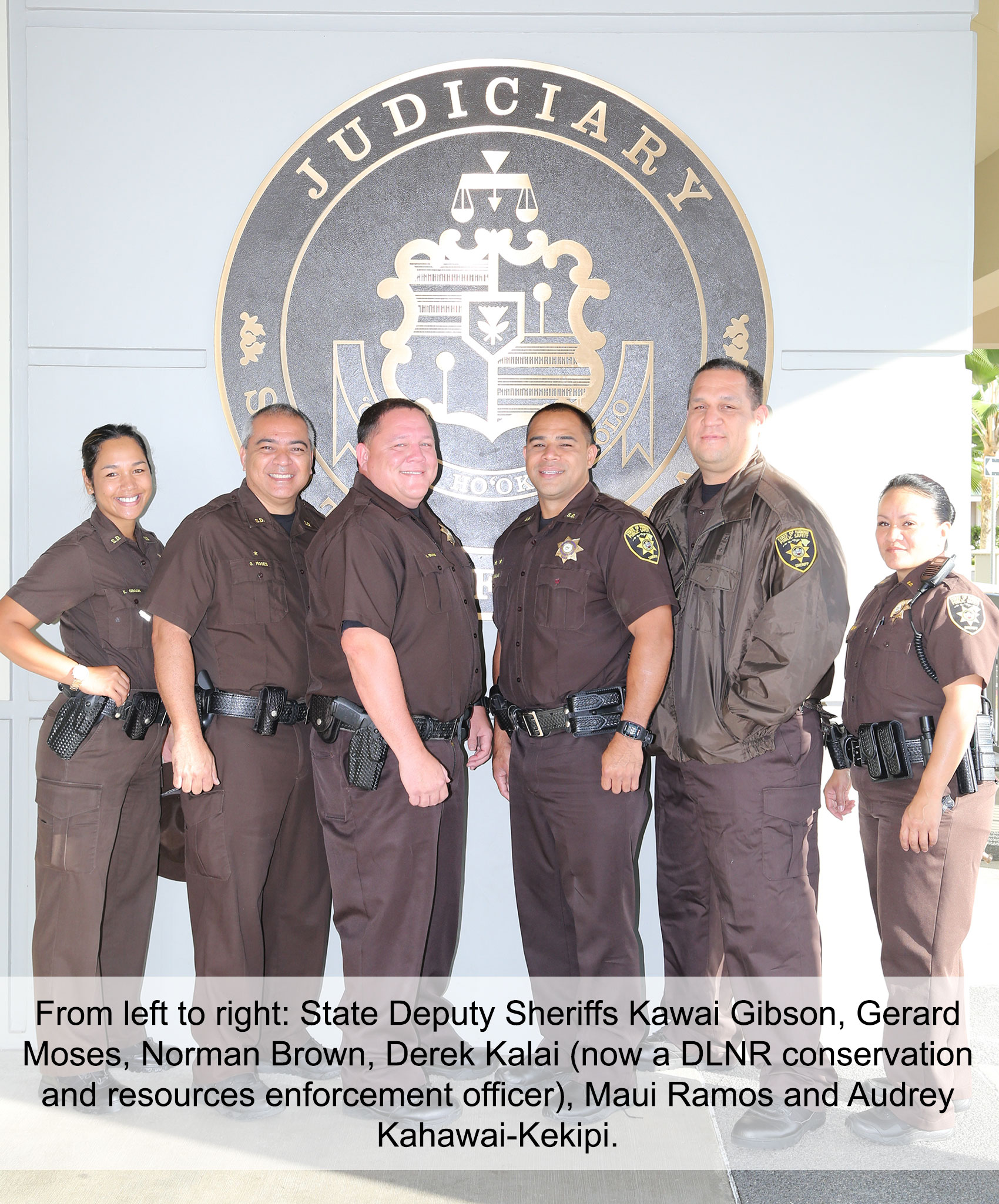 “As law enforcement officers, our job and responsibility is to prevent and respond,” says Kahawai-Kekipi. On Hawaii Island, the sheriffs are responsible for law enforcement services for the interior and exterior areas of Hawaii Island judiciary buildings — including providing transports and escorts of inmates and custodies to and from the courts or off island and executing warrants of arrests as well as responding to incidents within the courtrooms, to confrontations and domestic violence situations in the common areas and/or parking lots, and to situations within the vicinity involving persons needing medical assistance due to illnesses or injuries.

Kahawai-Kekipi recalls an incident involving death threats made against two Circuit Court judges by a Hawaii County resident. “We provided 24-hour, round-the-clock law enforcement for the judges at the courthouse and their homes, and also for their spouses.”

With the recent ruling in United States v. Sanchez-Gomez, where pre-trial detainees are no longer restrained (shackled) when they are brought before the judges, Kahawai-Kekipi says she is worried about the safety risks to court staff, public and deputy sheriffs. “The ruling makes our job that much more difficult, particularly in dealing with custodies who are verbally and physically confrontational.” She adds, “We also have limited manpower and often don’t have enough deputies to provide patrol functions for the courts because foot patrol deputies are often reassigned to the cellblock section to assist with custody and inmate movement and management.”

To supplement her income, Kahawai-Kekipi works part-time as a ranger on Maunakea with the Office of Maunakea Management. It is a non-law enforcement position; however, her law enforcement skills came in handy a few months after she became a ranger in 2015. At the time, an upset individual, who demanded to be let through a roadblock restricting access to the summit of Maunakea, struck her sedan into Kahawai-Kekipi’s assigned ranger truck and shifted into reverse, placing a deputy sheriff in danger. Kahawai-Kekipi’s law enforcement training kicked in, and she assisted in extracting the driver from the vehicle and restraining her.

When deputy sheriffs are compared to security guards, Kahawai-Kekipi explains that security guards “observe, report and provide presence” while sheriffs provide a variety of law enforcement services to the public, which includes ensuring the safety of the public even at the risk of their own safety. That’s why she’s concerned about deputy sheriffs leaving the department.

“It is difficult to provide the needed law enforcement services for the Judiciary, other agencies and the public when we are losing deputy sheriffs right out of sheriff recruit training and seasoned deputy sheriffs to other law enforcement agencies because the pay is better and the cost of living in Hawaii is astronomical,” Kahawai-Kekipi says. She has been a negotiating team member in the first Unit 14 contract and was involved in the Unit 14 arbitration hearing in January. During arbitration, she told the panel, “We are seeking retention of our deputy sheriffs, and to further professionalize the division.”

Kahawai-Kekipi wants to make sure our state law enforcement officers and ocean and water safety officers are compensated fairly for the work they do in keeping the public safe. “Being a union member and a part of HGEA Bargaining Unit 14 provides me with the opportunity to work toward improving working conditions and wages,” she says. “Formulating a union contract is not a quick and easy process as some may think. It requires member input, effort, time and dedication in order to create a working contract that is appropriate and strong. I am truly grateful to all of the AFSCME and HGEA staff for their dedication and tireless efforts in helping us arrive to where we are today.”