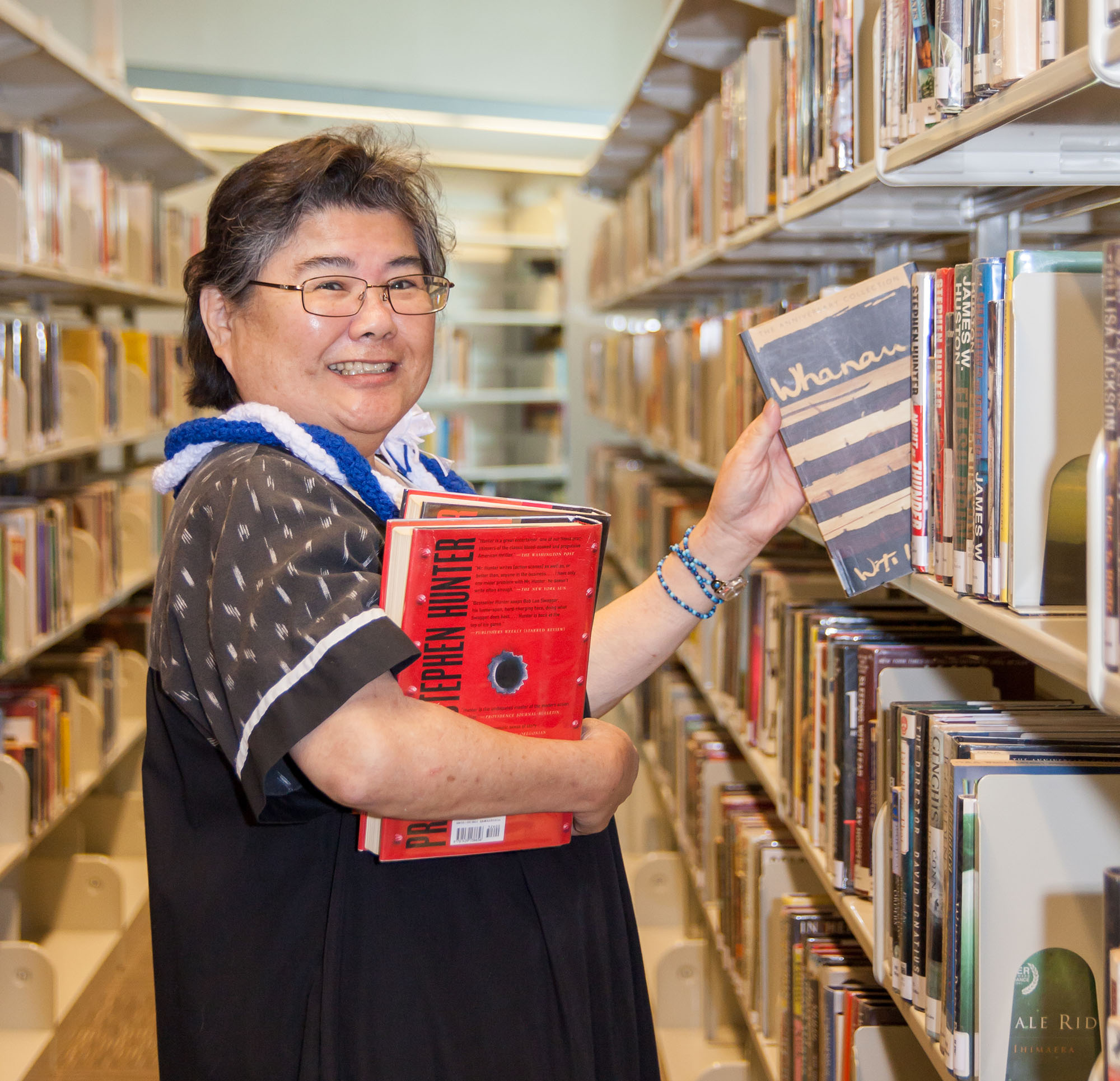 After 40 years of working in the Hawaii State Public Library System (HSPLS), Unit 3 member Carol Ann Kaneshiro has decided to retire on Aug. 1, much to the envy of all of her co-workers. “People tell me, ‘Why retire now? You’re still young.’ I tell them that’s why I’m retiring because I’m still young,” she joked.

Although a lot has changed in four decades, what has remained the same is the library assistant’s love of books, and more importantly, an affinity for one-on-one interaction with people from all walks of life. “When serving patrons, you talk story, get to know them, and you learn from them. That’s what I like. I thrive on interaction,” said Kaneshiro, who has been with Aiea Public Library for the past 16 years. “I have had such a great experience working for the library system and have really enjoyed it. I’ve met so many different people.”

When she was starting her career in the 1970s, Kaneshiro was interested in being a public school teacher. However, after being “weeded out,” as she calls it, during the application process, she decided to take a different route to public service. 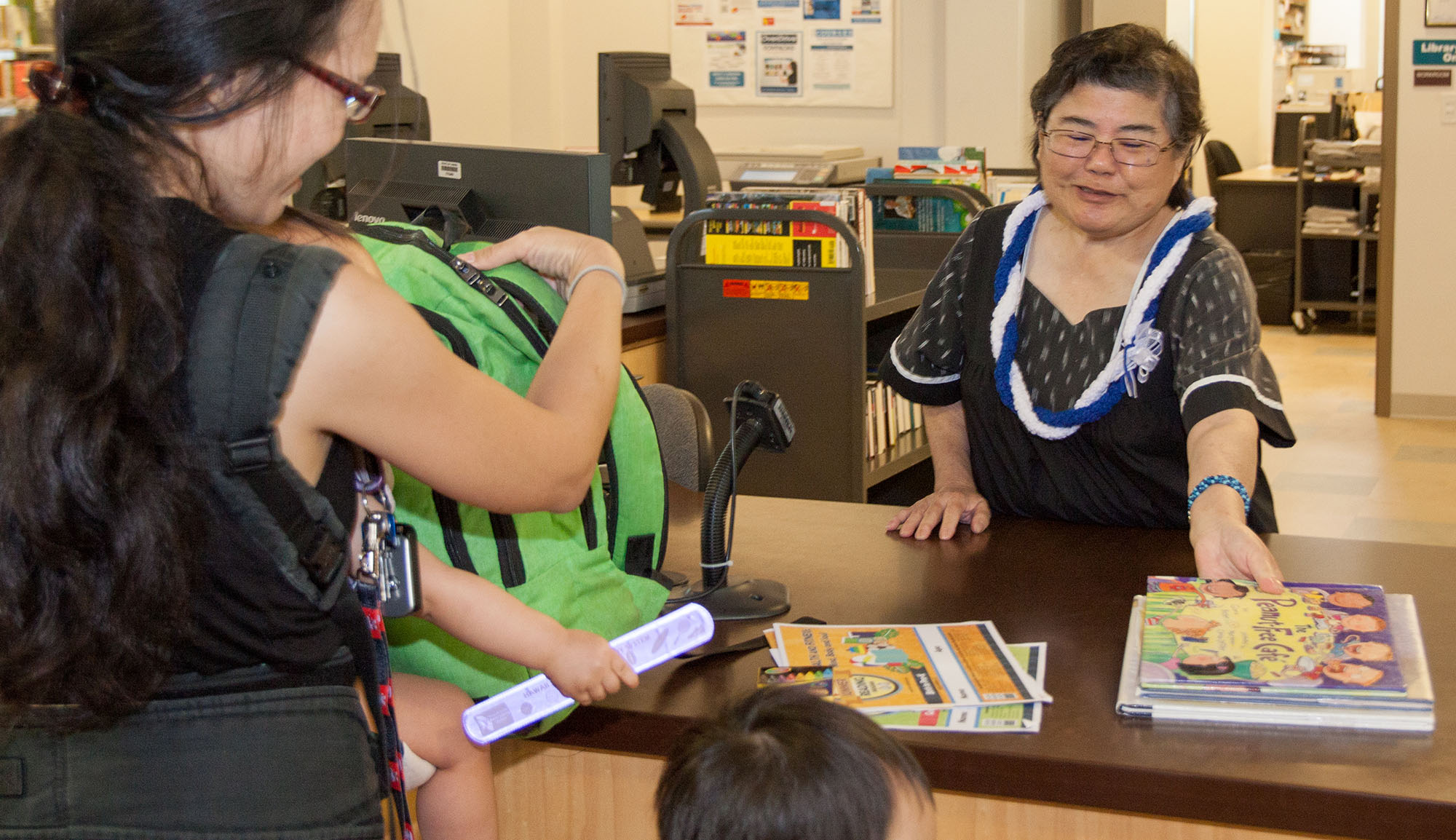 With her four-year social sciences degree from what was then called Hawaii Loa College and having completed classes for a library technician program, Kaneshiro was offered a job at Radford High School’s library, where she worked for 15 years.

“Being in the library was another way to get into teaching,” she noted. “You’re helping patrons find information they need. Whether it’s for research or leisure, they come to the library for information, and I help them find it. The library is an excellent educational and informational resource.” At Radford she also helped to supervise the student monitors, and at the public libraries she trained the student helpers.

She fondly remembers going out in the bookmobile in the 1990s to the Leeward areas of Waianae, Nanakuli and Ewa Beach and to Waiawa Correctional Facility. “At the time, for people in those communities, there wasn’t a library or they didn’t have access to a nearby library,” recalled Kaneshiro. “The bookmobile was their library.”

Other memorable experiences include helping to open the Salt Lake-Moanalua Public Library in 1992, and more recently, the new Aiea Public Library in July 2014. Kaneshiro kept postponing her retirement until the new Aiea library was built and opened. The environmentally-friendly library, with a high-efficiency air-conditioning system and 6,000 square feet of photovoltaic solar panels, is now located on the site of the former Aiea Sugar Mill, and the building is reminiscent of the old mill. Aside from the countless books, DVDs and CDs, the library boasts high speed fiber connectivity for public Internet access; free wireless Internet access with a valid HSPLS library card; computers for public use; two self-help check out stations; a large program room for library events, community meetings and activities; and more parking for library patrons.

Kaneshiro is proud of the new library. “We have patrons who come in and say they used to come in as a kid, and now they’re bringing in their own children,” she said. “They come from across the island, too. We offer services like one-on-one computer classes and foreign language books, and they can even come in to do their taxes.” 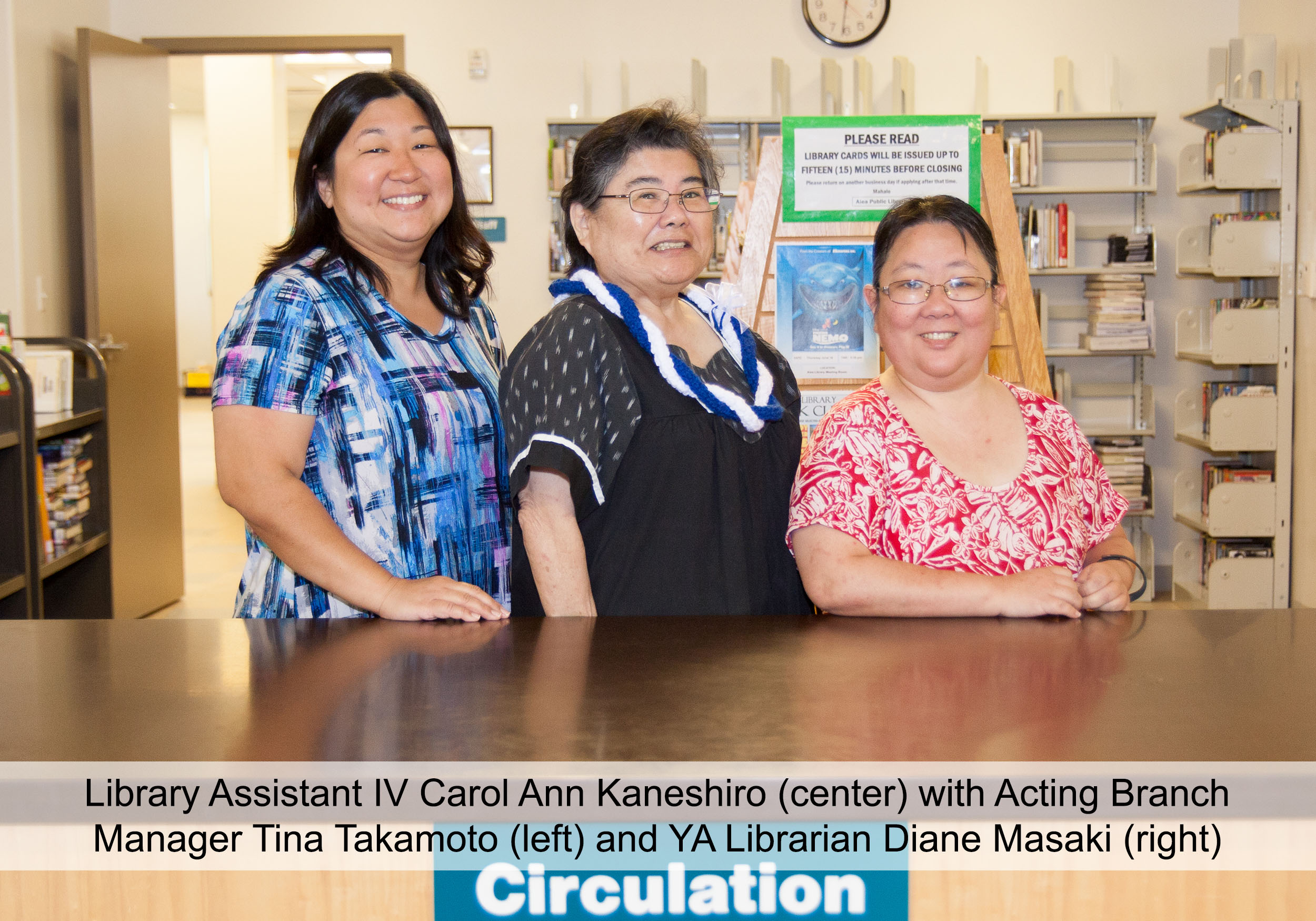 Not one to toot her own horn, Kaneshiro revealed, after some prodding, that she and the other staff at Aiea Public Library received the 2002 HSPLS Team of the Year Award, which recognizes outstanding performance among Hawaii’s public libraries. As stated on the unexpected commendation, their team “exemplifies the spirit of teamwork which is shown as each staff member knows his or her job, is cross-trained to assist with the full range of library needs, performs library and community services, is mutually accountable for the team’s results, and is willing to go the extra mile.”

It is everyday union members like Kaneshiro and her co-workers who personify dedicated public employees working together and selflessly using their skills and knowledge to serve their communities. For Kaneshiro, who comes from a family of federal government workers, going to work for the state 40 years ago was an attractive option with its many employee benefits. And as a former HGEA steward, she feels it is critical for workers to be involved with the union. “Our union is important. If we didn’t have the union, we wouldn’t have someone fighting for our contract and benefits,” she said. “But even more significantly there’s a sense of unity, and our union brings people together.”

With libraries having gone high tech from the days of the old card cataloging system, and with the widespread use of the Internet, is Kaneshiro worried about the future of libraries? “I think libraries will always have a place,” she said. “People still want someplace to go and meet their friends. They also prefer having a book in their hands to read instead of the computer. We offer DVDs for people to rent, too.”

People still like books. According to the Association of American Publishers, which tracks sales from more than 1,200 publishers, digital book sales fell nearly 10 percent in 2015 from the previous year while paperback sales grew by 16 percent. Public libraries offer an affordable (free) method to access books. Kaneshiro added that libraries also offer e-books, or digital books, and e-learning — if you have a valid library card and know your PIN number, you can access a variety of online courses for free. They provide various programs like Preschool Storytime, summer reading programs for children, young adults and adults, movie days and book clubs. Libraries also serve as a resource for community programs and events, such as voter registration, hurricane preparedness and child care services.

What Kaneshiro will miss about going to work every day is being with her co-workers and seeing the patrons, regular and new, from toddlers to seniors. She truly values the friendships she has made over the years.

It’s no surprise then that in retirement she will continue to give back to the community. In addition to going holoholo, walking, taking care of her cats, Pumpkin and Kitty, and perhaps doing some traveling, Kaneshiro plans to do some kind of volunteer work — possibly in the schools, hospital or the library.