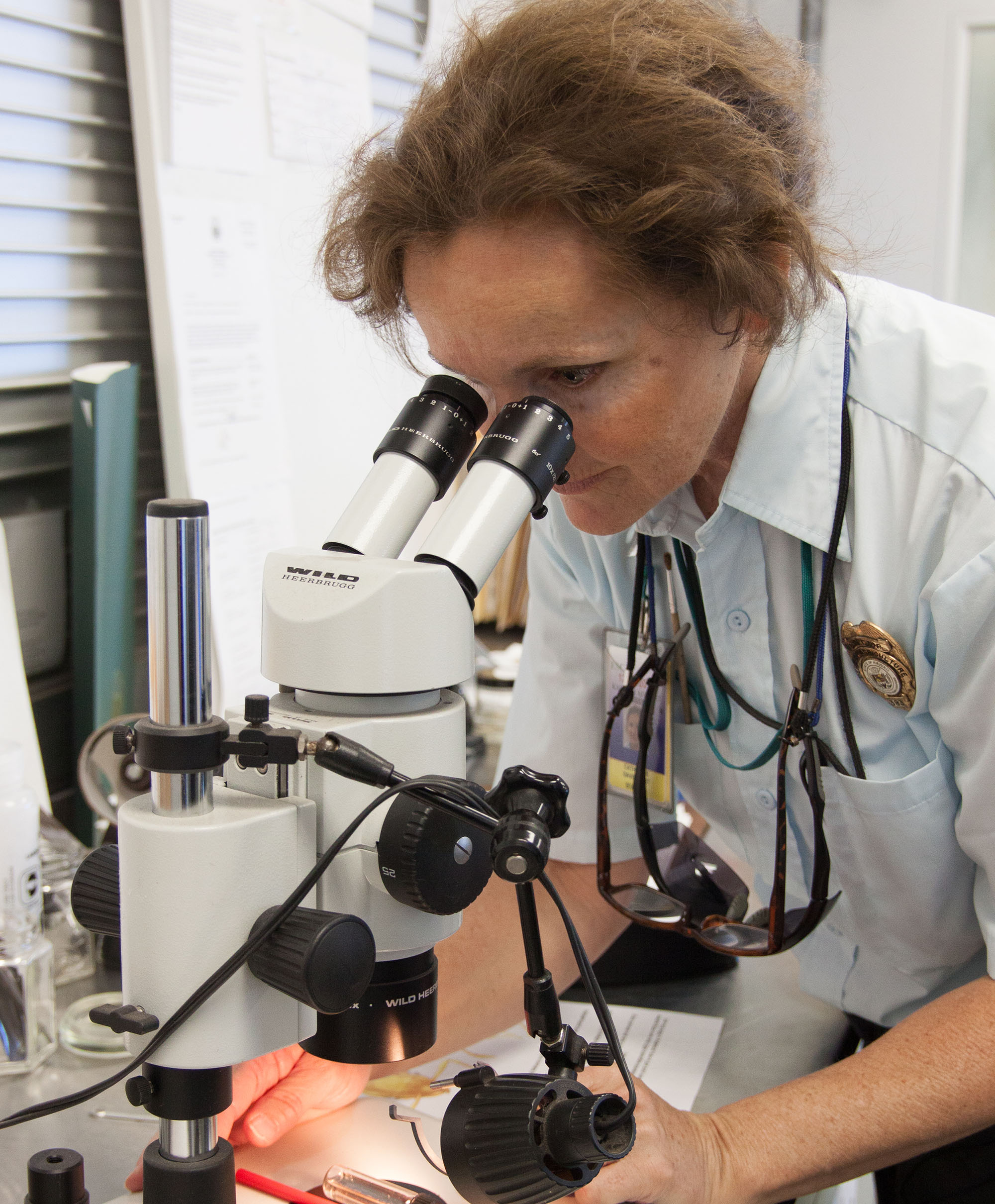 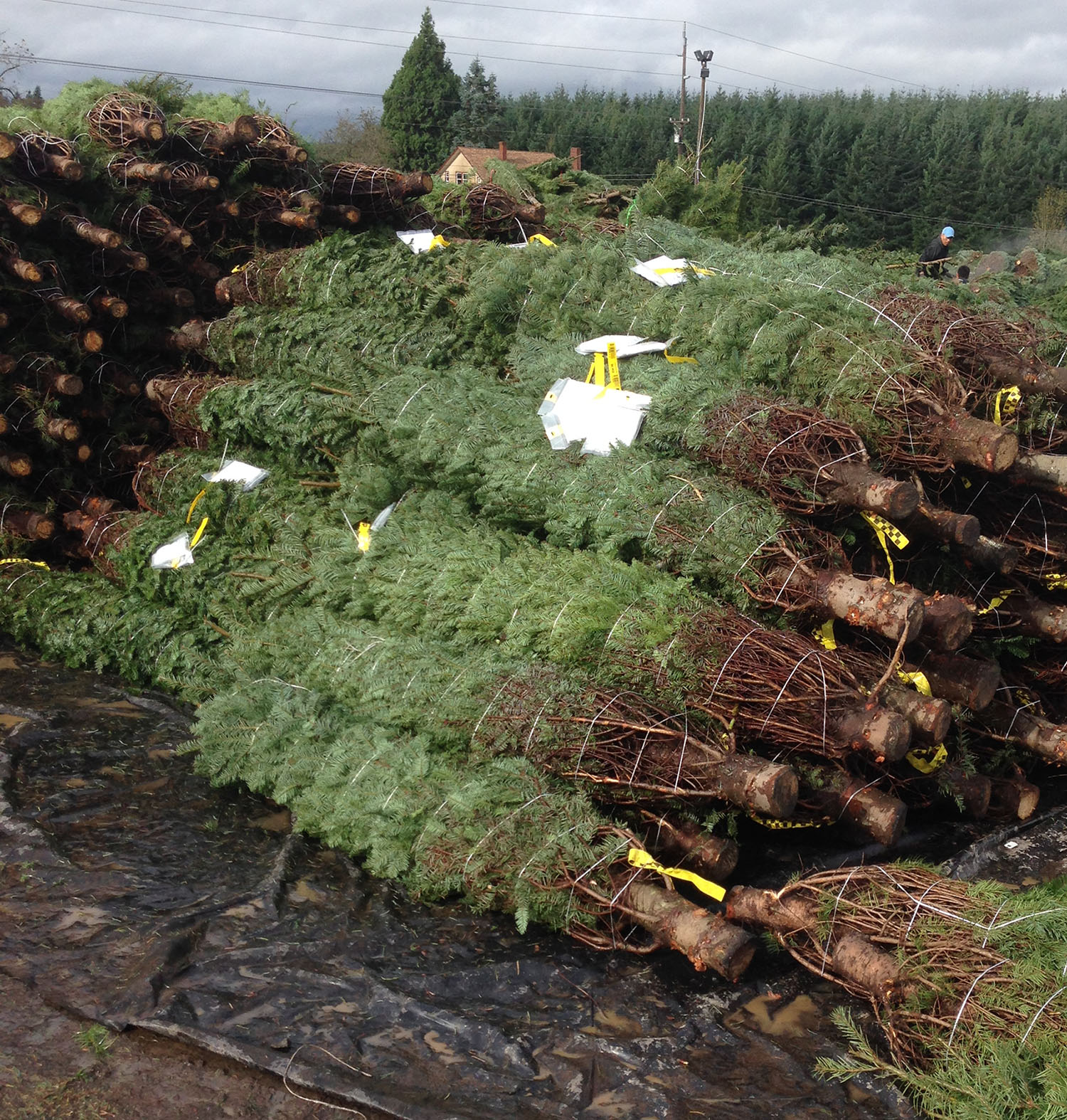 As the nation's leading producer of Christmas trees, Oregon ships approximately 250 containers, or 200,000 Christmas trees, to Hawaii each year. With a fairly new inspection program in place, trees from Oregon are inspected for unwanted pests such as slugs and yellow jacket wasps even before they reach our state.

Since 2012, Hawaii Department of Agriculture has worked with Oregon Department of Agriculture (ODA) to inspect Christmas trees bound for the islands. Plant quarantine inspectors from Hawaii get a head start on the process by going to Oregon to look at the trees before they are shipped. ODA also works
with growers on how to handle the trees and unwanted pests during the harvest process. Everyone involved works together to ensure the trees are sold pest-free. 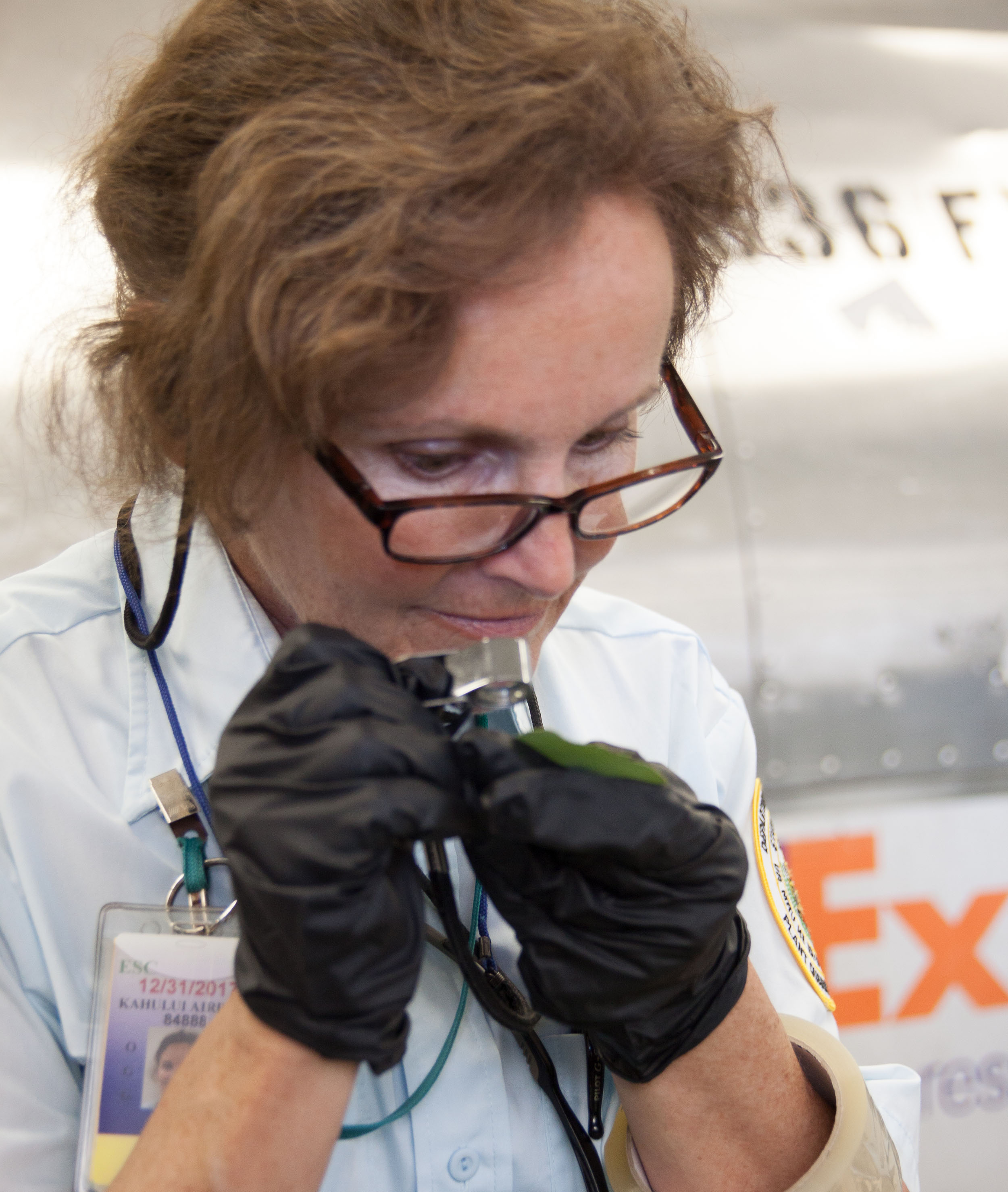 Fascinated with the Polynesian culture after reading about the Hokule‘a in the National Geographic Magazine, Catherine Davenport took a leap of faith, and a job as crew member with Pacific Whale Foundation, delivering a sailboat from California to Maui. She had only planned to be away for two years. But nearly 30 years later, the Connecticut native remains on Maui, still captivated by the people and lifestyle of her adopted island home and eagerly continuing to learn about the Hawaiian culture for which she has a deep respect and interest.

It’s no surprise then that Davenport’s job is to protect Hawaii’s people and the environment. As part of the Plant Quarantine Branch with the state Department of Agriculture — and the only female plant quarantine inspector on Maui — she is in the first line of defense to keep invasive pests out of our islands. From flowers, fruits and vegetables in the market to clams and oysters in the restaurant, she and nearly 60 plant quarantine inspectors statewide check tons of various items to make sure they’re safe for all of us.

“I value protecting the unique flora and fauna of Hawaii, keeping the forest and ocean free of invasive species and helping our neighborhoods be free of injurious pests,” Davenport said. “Supporting sustainability for the islands, be it agricultural, or a clean ocean to fish — those are the things I value.”

As plant quarantine inspectors, she added, “we do our very best to protect Hawaii.”

Images of beautiful tropical flowers and plants may come to mind when people think of Hawaii. The mission of the Plant Quarantine Branch is to prevent the introduction and establishment of plants, animals and diseases that are detrimental to the state’s agriculture industry and the environment; and to prevent the spread of destructive pests among the Hawaiian Islands.

Not widely known is that the state’s plant quarantine program began more than a hundred years ago when, in 1888, King David Kalakaua declared that in order to protect the coffee industry in Hawaii, new coffee plants would not be allowed into the islands. In 1890, laws were passed to prevent the introduction of harmful insect pests and plant diseases. In 1905, after 14 snakes were seized, the responsibility of preventing detrimental non-domestic animals from coming into the islands was added to the plant quarantine program in order to protect Hawaii’s people and the environment.

Because of the program, Davenport noted, today we still do not have snakes or rabies in Hawaii. 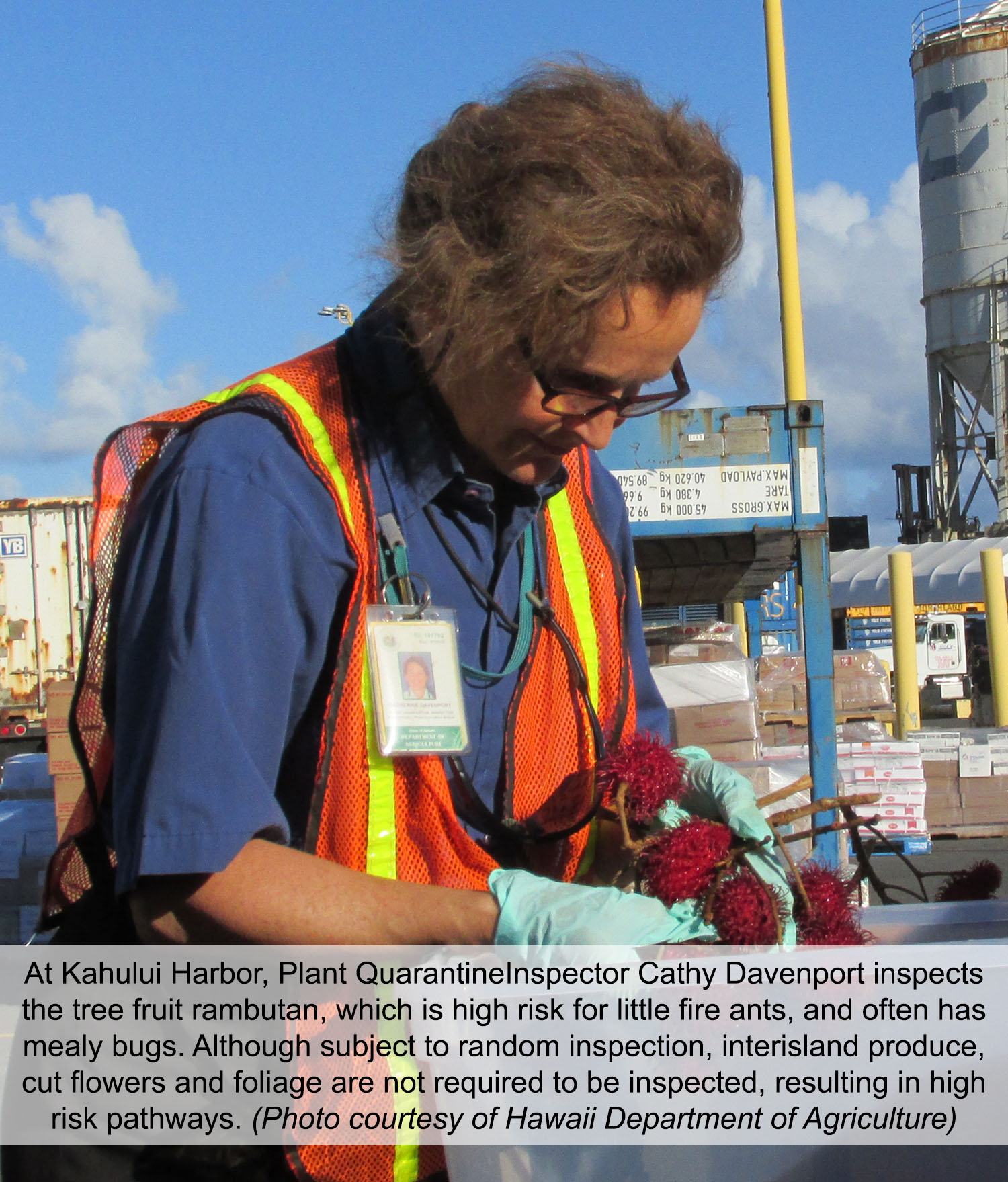 Keeping invasive pests — like little fire ants, coqui frogs, snakes and lizards — out of our state is no easy task. Plant quarantine plays a critical role in monitoring cargo and passengers at all ports of entry for the illegal importation of potentially harmful pests. “We have legal jurisdiction to inspect agricultural commodities entering the state, and if need be, confiscate a commodity harboring a pest injurious to Hawaii,” Davenport said.

It’s impressive what she and her colleagues do every day. With monthly shift changes, they work either at the airport, which is open seven days a week including holidays, or maritime at the harbors, which is open five days a week and on weekends if a barge is late. They often work overtime.

“Most people don’t know how many places we cover in a day, how varied our duties, or how physical our job is. We don’t sit much,” Davenport added. “We climb up and down stairs, lift and carry boxes regularly — heavy boxes, frozen boxes, wet boxes — during the heat of the day, in cold freezers, in noisy areas, in wind or rain. We go home sweaty and dirty.”

Maui is fortunate to have the ASAP (Alien Species Action Plan) inspection building near Kahului Airport where air cargo agricultural commodities are brought to be inspected. No other island has such a facility, which opened in 2008 with federal funds gained from the leadership and support of former Haleakala National Park Superintendent Don Reeser, the Federal Aviation Administration, the U.S. Fish & Wildlife Service, the Hawaii Department of Transportation Airports Division, the Hawaii Department of Agriculture, various conservation groups and many others in the Maui community. The ASAP facility is comprised of four inspection bays that allow inspection out of the sun, wind and rain; freezers to destroy insects found on various commodities; and an autoclave machine to steam heat items with plant disease.

Davenport appreciates the bond she and her co-workers share with the vendors and companies they deal with. She recalled a time when Hawaiian Air Cargo and Aloha Air Cargo worked with them to hold their interisland agricultural commodities being flown in all night from the Big Island. “Being high risk for little fire ants, these commodities were not released to their customers until we had a chance to inspect them.” As all interisland shipments of produce, cut flowers and foliage are not required to be held for inspection, Hawaiian Cargo and Aloha Air Cargo are not mandated to do this. “They did it out of the goodness of their hearts, and knowing that was the right thing to do,” she added. “We accommodated them by adding a 6:00 a.m. shift to have as little impact on their business as possible. It may seem silly, but that goodness and teamwork still brings tears to my eyes every time I tell the story.”

A plant quarantine inspector’s job goes beyond the Agricultural Declarations Forms that they collect from passengers coming off of a mainland flight. “It is rewarding to see how honest and caring most people are,” Davenport remarked about the forms. “They share with us their stories of invasive species and plant diseases in their home state or country. The Declaration Form serves as a good education tool for those who want to do the right thing.”

At maritime, the inspectors check commodities arriving through the harbors as well as at vendors such as grocery stores. With the addition of new employees, they are able to inspect the interisland vehicles and produce at Young Brothers. Davenport again marvels at how cooperative and accommodating the vendors and businesses are. “Young Brothers is not required to allow us to check these items, but they understand that we are all in this together to protect each island.”

It is also caring people in the community that Davenport gives credit for keeping Hawaii safe. They’re the ones who call them to report sightings of unwanted pests such as little fire ants. “The public is our most valuable resource for protecting these islands,” she said.

With their community outreach efforts, which Davenport especially enjoys and is heavily involved, they are giving the public the tools and knowledge to help protect the islands and stay vigilant. “The people we come in contact with are our allies,” she acknowledged. “We work with them, as team players, to protect Hawaii. It’s a collaborative effort.”

Passion for the job

Talking to Davenport, one can’t help but be impressed by her wealth of knowledge about Hawaiian culture. Her work experiences have been interesting and diverse, including stints as a graphic artist, field archaeologist, hiking guide and research technician. Growing up at the edge of a forest in Connecticut, she was always interested in plants and enjoyed the wonder of seeing them grow.

Davenport’s endless passion for learning and her positive outlook drive her to give her all to her job. In spite of their titles, plant quarantine inspectors are trained for specialized duties, including how to hunt, catch and kill snakes by hand. “There was such camaraderie during the snake training. And I came back from Guam (where training is done) surprisingly comfortable with that activity,” she said proudly. They can volunteer for other training, such as how to subdue a bat, which may have rabies.

Additionally, Davenport, who has a master’s degree in botany from the University of Hawaii at Manoa, teaches at University of Hawaii – Maui College. For 17 years, she has taught Hawaiian Field Biology and Hawaiian Ethnobotany classes. “My students are a precious part of my life,” she said. 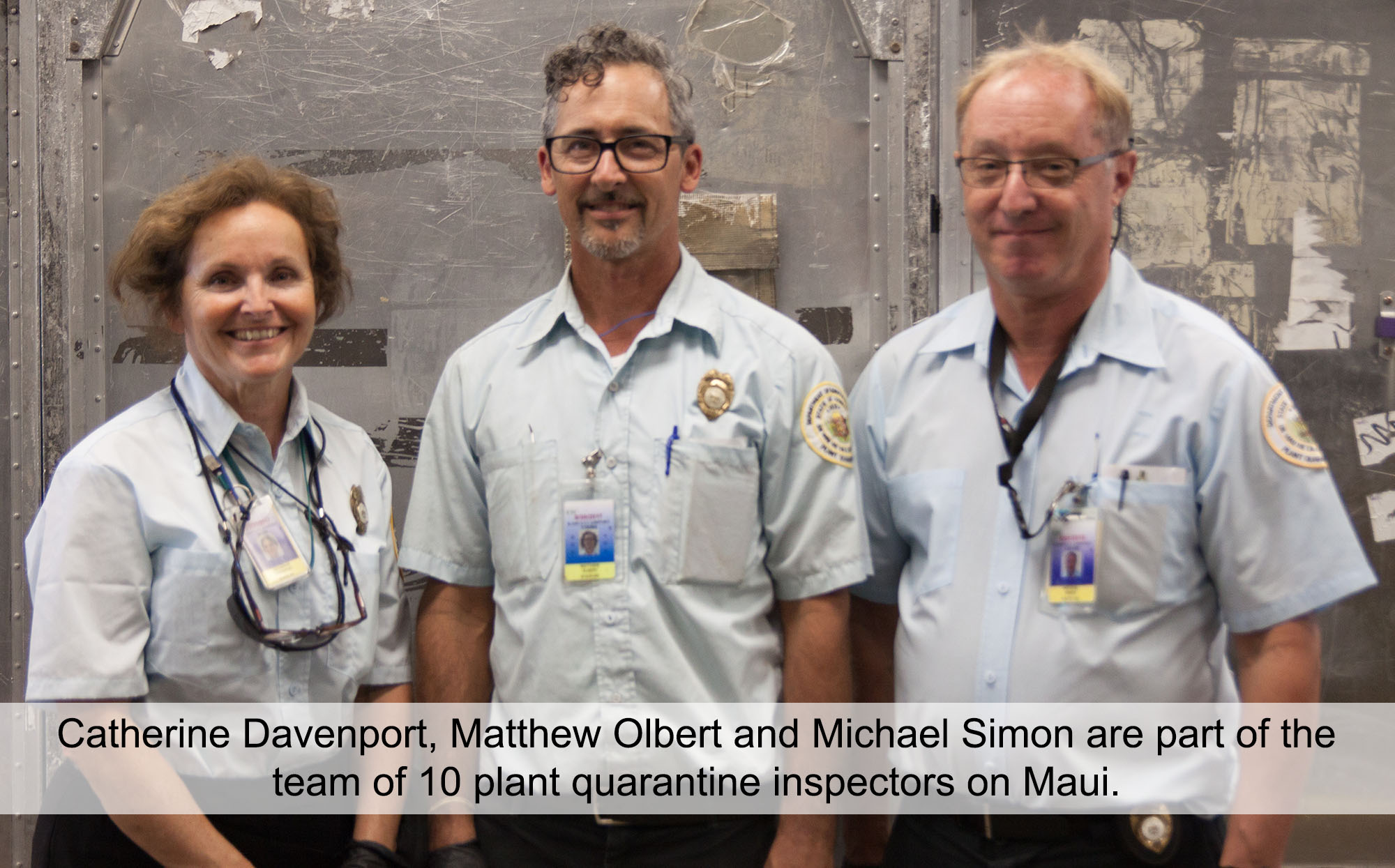 Davenport believes her nine-year career in plant quarantine just keeps getting better. “Over the years we have gotten tighter as a team and as a community. We adjust, and learn where to strike to be more effective and when to streamline,” she affirmed. “We have such great workers. We just hired some terrific new inspectors, and it feels like we can soar. At the core, we have, in my opinion, the perfect supervisor. He’s calm, respectful to all, ever watchful, has our back, and knows how to position us.”

And they continue to work hard despite not being fully staffed since Gov. Linda Lingle‘s statewide layoffs several years ago.

As an HGEA member, Davenport trusts our union to protect the rights and benefits of state and county employees. “The employer functions best when its employees feel safe and secure enough to give their all to a job,” she said. “People spend most of their waking hours working hard at a job. When we give so much for most of our lives, it is peace of mind that in our older age, at retirement, there will be some financial means and health coverage. Our union, HGEA, does that for us. They are dedicated and brave members who step up and get involved.”

She is proud to be a public employee. “Think about the variety of jobs done by public workers, and you realize how vital they are to our quality of life.”

For Davenport and her fellow plant quarantine inspectors, they are never far from their jobs. As they encourage the public to do, they are constantly on the lookout for invasive pests outside of work. “We’re always in search mode,” she said. “It’s a war. The fear is that invasives will win.”

In addition to the outreach activities at work, Davenport continues to do her part in educating others about protecting Hawaii’s people and environment, whether it’s through teaching at Maui College or as a board member of Friends of Fleming Arboretum at Pu‘u Māhoe.

“There is much work that needs to be done,” she said. “We are all in this together to take care of these islands. And to never give up.”